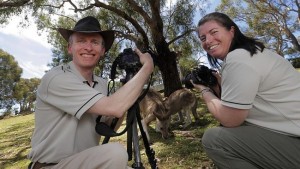 We are a Hobart-based team of two (Roy and Coreena) who are passionate about photography and the outdoors; our goal is to share this passion with photography enthusiasts of all levels during experiences that inform and inspire… we do this by offering a range of experiences that provide the opportunity for you to visit amazing places with a local photographer guide.

* Image courtesy of The Mercury Newspaper

On a Shutterbug Walkabouts experience you’ll have ample time to discover, experience and photograph each location taking full advantage of the time, light and conditions for unique images, not just snapshots. Inner shutterbugs will be inspired, creativity unearthed and photo-taking techniques improved. You will gain a newfound understanding to enhance the photos you take home from your Tasmanian holiday. Options include half-day, full day or multi-day tours; a personalised itinerary will cater to individual interests and create a well-complemented Tasmanian holiday.

Both Roy & Coreena are passionate about travel, the outdoors and of course, photography; they thoroughly enjoy sharing their knowledge and experience so that others gain as much enjoyment from taking photos as they do. Coreena is a knowledgeable photographer and an experienced tour guide and you will find her leading some of our photography-inspired sightseeing tours. Roy is a skilled and talented award-winning photographer with a great degree of expertise to share. In addition to leading photography-inspired sightseeing tours, he offers specialty photography tours, one-on-one photography tuition as well as small group workshops in stunning outdoor locations around Hobart. 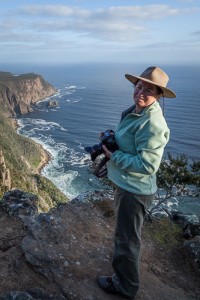 Coreena has always enjoyed photography and has travelled to many parts of the world, never without a camera; her passion for photography further inspired after meeting Roy.

Coreena’s photographic skill has progressed over the years through practical learning and experience; she has a special interest in the natural environment, birds and wildlife and is keen to share her knowledge with budding photographers taking a similar path and keen to learn more.

For more than 15 years Coreena has worked in a diversity of roles in the tourism industry, including as a tour director, a camping safari guide and a camp cook in remote areas of Australia. During these journeys, travellers benefitted from Coreena’s photography knowledge helping them capture memorable holiday photos of the places they travelled.

Coreena has a fascinating family history in Tasmania with ancestors amongst the first to arrive in Van Diemen’s Land (now Tasmania) in 1804, and yes, one was a convict! More of her ancestors arrived in Hobart Town in 1808 as free-settlers after they were transferred from Norfolk Island.

Coreena primarily leads our photography-inspired sightseeing tours. She also tutors/mentors amateur photographers at the beginner level and works alongside Roy in a support role during small group walkabouts and workshops.

Roy is an award-winning photographer and an accredited professional member of the AIPP (Australian Institute of Professional Photography). For more than 35 years he has captured many images from around the world having travelled far and wide to almost all of the world’s continents. He is known by many for his captivating photographs of the natural environment and diverse landscapes.

Over the years Roy has mentored many a budding photographer both in film and digital photography. He has a wealth of knowledge and experience for the visual art of photography as well as a comprehensive insight into the technical aspect of an extensive range of camera brands and models available in the market today; this includes an expertise for interpreting the instruction manuals.

Roy’s attention to the finer details of nature and other subjects will inspire you to look further than the scenery giving you the opportunity to capture unique images, not just snapshots.

Roy will be your mentor/tutor for all tuition and workshop sessions. He also leads our speciality photography experiences and some of our photography-inspired sightseeing tours. Roy speaks German as a second language.