Turning of the fagus

Turning of the fagus in Tasmania

A spectacle of nature in autumn / the fall

Let us introduce you to fagus, and its fascinating survival through aeons 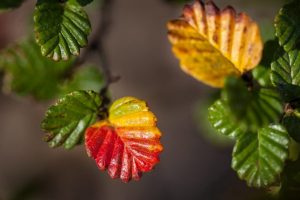 Fagus is a slow-growing tree that reaches heights of between two and three metres. In saying this, its size varies according to the altitude of individual sites – for instance, it appears more like a shrub at higher altitudes.

What’s in a name?

The botanical name Nothofagus gunnii (N. gunnii) is latin… ‘nothus’ means ‘false, and ‘fagus’ means ‘beech’. So, it’s like a beech but not. The name ‘gunnii’ honours Ronald Campbell Gunn, the first to collect a specimen of the tree in 1847. 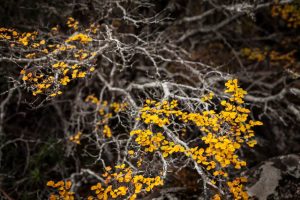 Other names and an appropriate nickname

The most common name for N. gunnii is ‘fagus’. It also has a deserving nickname of ‘tanglefoot’. This refers to its gnarly and twisted branches that grow close to the ground and hug surrounding rocks and boulders – indeed, a trip hazard for bushwalkers.

Where it all began (mya = million years ago)

The origins of this unique plant have been traced back 100 million years! It was at this time that the first southern beech plant genus, known as Nothofagus, evolved. Fossils reveal the existence of a wide distribution of N. gunnii across Tasmania around 35mya. At that time, Tasmania was positioned further south of its present-day position and experienced long periods of winter darkness. Without adequate sunlight to harness energy for growth, plants would simply adapt to survive the winter season by entering a phase of dormancy by dropping their leaves to conserve energy. 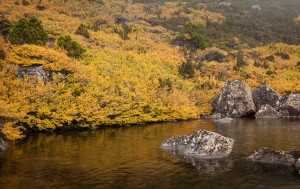 This species of fagus (N. gunnii) grows in alpine and sub-alpine regions of Tasmania. Fagus is found in areas above 800m where winter temperatures are low, and rainfall is high (above 1800mm annually) and is not fire tolerant in any way. If fire was to reach its cool mountain habitat, it a plant that simply would not regenerate. It risks dying off forever! The habitat is also shared other sensitive vegetation, like pandani, cushion plants, snow gums and a diversity of other unique Tasmanian plants. In all of Tasmania’s 6.8 million hectares, only around 10,000 hectares (0.15%) is fagus habitat.

What we see today

Fortunately for us, this species of fagus has retained its survival tactic of past eras. In autumn each year, all its foliage falls to the ground, leaving the branches bare over winter. But first, the leaves turn from a lush green to different hues of yellow, orange and (sometimes) red. Only if we are super-lucky do we catch a glimpse of the rusty red hues, because that leaf colour is not seen every year. Trees remain dormant throughout winter and until spring. Spring is of course when the weather warms up and green foliage returns for another season. 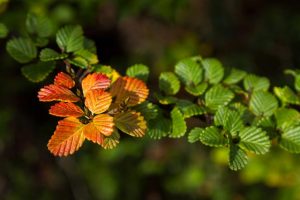 Anticipating the turning of the fagus

The turning of the fagus depends on sub-alpine conditions and the whim of Mother Nature. We generally anticipate the ‘turn’ to start any time from the beginning of April with the best of it lasting around two to three weeks before all the leaves have fallen. Suffice to say, there is only a small window of opportunity to see the spectacular autumn colours during this time. The most splendid and colourful display appears around the 25th April each year, an annual Australian public holiday known as ANZAC Day.

Factors like ability to photosynthesise, onset of colder weather along with strong winds, autumn rains and/or snow influence when, where and how long the turning of the fagus can be seen.

Why fagus most admired in autumn/the fall

The vibrant colour change of fagus foliage is truly captivating in autumn/the fall. The landscape is ‘painted’ with stunning autumnal hues which accentuates the many patterns, textures and colours of the foliage. And it’s for this reason that nature and photo-enthusiasts admire it during this time. From spring through to autumn, the plant has green foliage which, without an understanding of the habitat, is not as easily spotted from a distance.

Our passion and profession 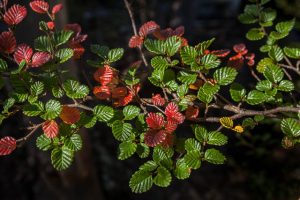 We eagerly anticipate the autumnal turning of the fagus each year, not only for ourselves but to stay informed on behalf of our tour guests too. Outside of leading tours, we aim to trek into the mountain landscape and photograph the ever-changing vibrant landscape. Each time we spend a significant amount of time seeking out a different perspectives like new and interesting patterns, textures and compositions. We search for the elusive red leaves too, which do not appear every year.

There’s Something About Maria (Island)

There’s Something About Maria (Island)