When an Echidna crossed our path

It was Friday 13th when an echidna crossed our path!

We live on a bush block just south of Hobart and for that reason we are rather accustomed to seeing ‘our’ family of Superb Fairy-wrens flitting about and Bennetts Wallabies grazing on the grasses – friendly encounters we never tire of – having an Echidna cross our path is no exception.

With the variety of visiting wildlife we can definitely say that we enjoyed another chance meeting with ‘our’ Echidna that we’ve named ‘Eddie’. We say ‘our’ echidna because a couple of years ago he (we’re of course assuming his gender) was seen by our driveway. Last year he waddled onto our deck and right up to our doorway. This year he was by our driveway and foraging amongst the bushy vegetation.

It may have been Friday 13th but we think we were quite lucky… we had the opportunity to observe how Eddie acted in our presence; while doing our very best not to disturb him too much from his normal activities as he fed on an abundant supply of ants.

It wasn’t a simple task to capture these photos… Echidnas are shy creatures and if disturbed or think they are under some kind of threat they will camouflage themselves in the vegetation or curl up into a ball exposing only their spines.

Eddie isn’t so much used to our presence as he has a whole bush block to roam. He was initially on alert each time he heard the sound of my camera shutter… but later became more comfortable with it. The three shots above show different stages of him curling up because of the unusual sounds he could hear.

We spent quite some time quietly watching on; it was wonderful to see that Eddie seemed to become more comfortable with our presence; so much so that capturing a photo with a long lens became more difficult because he got so close to us! 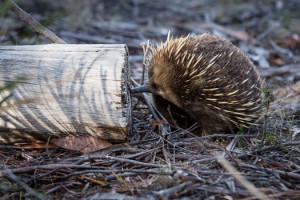 Join us for private wildlife photography tuition session to learn the fundamentals of wildlife photography on-location at Bonorong Wildlife Sanctuary. To immerse yourself in a full day at Bonorong, by request we can arrange exclusive access inside selected enclosures for incredible wildlife encounters and up-close photos (available for daytime or evenings).  There’s also plenty of opportunity to photograph wildlife in their natural habitats during our Weekend Photography Retreats too.

Escape your every day with photography…

Escape your every day with photography…